I sold my soul, betrayed myself. Yes, I have been to a football game in Brazil.

I hate football. Hate it, hate it, hate it! Always have, and will always do! Now I hate it even more after I dated a football player i 3 years. But being the adventure and open minded traveller that I am (noot). I actually went to a football game here in Rio De Janeiro. It´s kind of a must thing to do when you are in Brazil. Aaaand I actually bought the Brazilian football uniform!!! No, I´m not proud. But nobody is perfect. It was a match between Botafogo - Atlético PR. I´m not gonna try to impress you with my football knowledge. Cause it´s NADA there. So I´ll just let Wikipedia do the job. Read more about the teams her if you are a football idiot: Botagoa Futebol Clube and Clube Atlético Mineiro. Being the football fan that I am, I don´t even know the name of the stadium were the match found place. I have been to another big game before. Carling Cup Final 2009: Manchester United -Tottenham Hotspur at Wembley Stadium. Impress? Don´t be. I did it for love. Was there with my x-boyfriend. Funny what love can make you do! Im not gonna comment how the experience was, cause I know my x is stalking my blog. But the conclusion of the football experience in Rio De Janeiro is: OK! I can´t stand football, but the football game I went to yesterday was actually just fine. The vibe and the atmosphere at the stadium was worth going for! 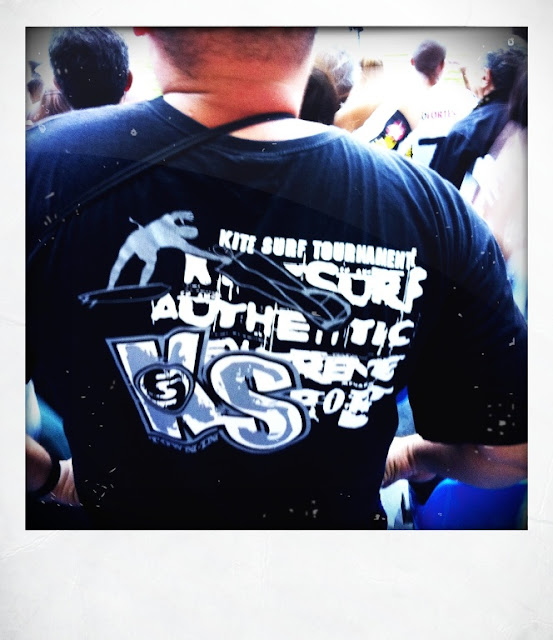 "My team" scored. But being the good fan that I am. I didn´t saw it. I was more concerned about this T-shirt in front of me. Kite Surf Tournament.... No way! You gotta be kidding. This guy is too fat to kite surf?
To be honest, I don´t even know the name of the team we were cheered on! But I know that they won. See? I´m not that hopeless!
Enjoy your day, It´s raining in Rio! CRAP!
Posted by Yvonne at 7:16 PM

Email ThisBlogThis!Share to TwitterShare to FacebookShare to Pinterest
Labels: Brazil